The Grivco prefect in Calarasi County

On October 15, 2008, the prefect of Calarasi county, conservative Jenel Serban, resigned from office to run in the parliamentary elections on the list of the Liberal Party. In his capacity as prefect and head of the County Land Fund Committee, he signed the property deeds for the lands returned to the Romanian Academy in Calarasi county. Part of these lands ended up being leased to the Vociulescu family's group, on the basis of a protocol concluded in 2006 between the Romanian Academy and Grivco SA.

In 2009, Jenel Serban became a manager with Grivco SA.

Jenel Serban is currently the head of OJPDRP Calarasi (County Office for Payments for Rural Development and Fishing), a position in which he manages European-funded projects within the National Rural Development Program. One of the beneficiaries of these funds is Agro Seed Muntenia, formerly Grivco Agro, which exploited and still does 2,000 hectares of land in Perisoru, Calarasi county, and which, according to AgroSeed Muntenia manager Ion Mihai, accessed EUR1 million in EU funds for investments in its irrigation installation in Perisoru.

Jenel Serban and Ion Mihai used to be associates in a firm, Art Media SRL, which is currently owned by Ion Mihai and his wife, Liliana Mihai. Ion Mihai, the current manager of AgroSeed Muntenia, formerly Grivco Agro, is the brother of Lazar Mihai, CEO of Grivco SA and the representative of the Voiculescu family on the boards of most companies in the group.

According to Ion Mihai, AgroSeed Muntenia, concluded several services contracts over the past years with AgroCristi SRL Calarasi, in which Jenel Serban is a shareholder.

In his capacity as prefect, Jenel Serban (pictured) is the one who signed the property deeds for the lands returned to the Romanian Academy in 2007-2008. According to a story by Agerpres, he resigned from the position of prefect on October 15, 2008 to run for a seat in Parliament.

According to a document obtained by the Media Investigation Center, all property deeds issued to the Romanian Academy in Calarasi were signed by Conservative Party member Jenel Serban, prefect, in his capacity as head of the county land fund committee. 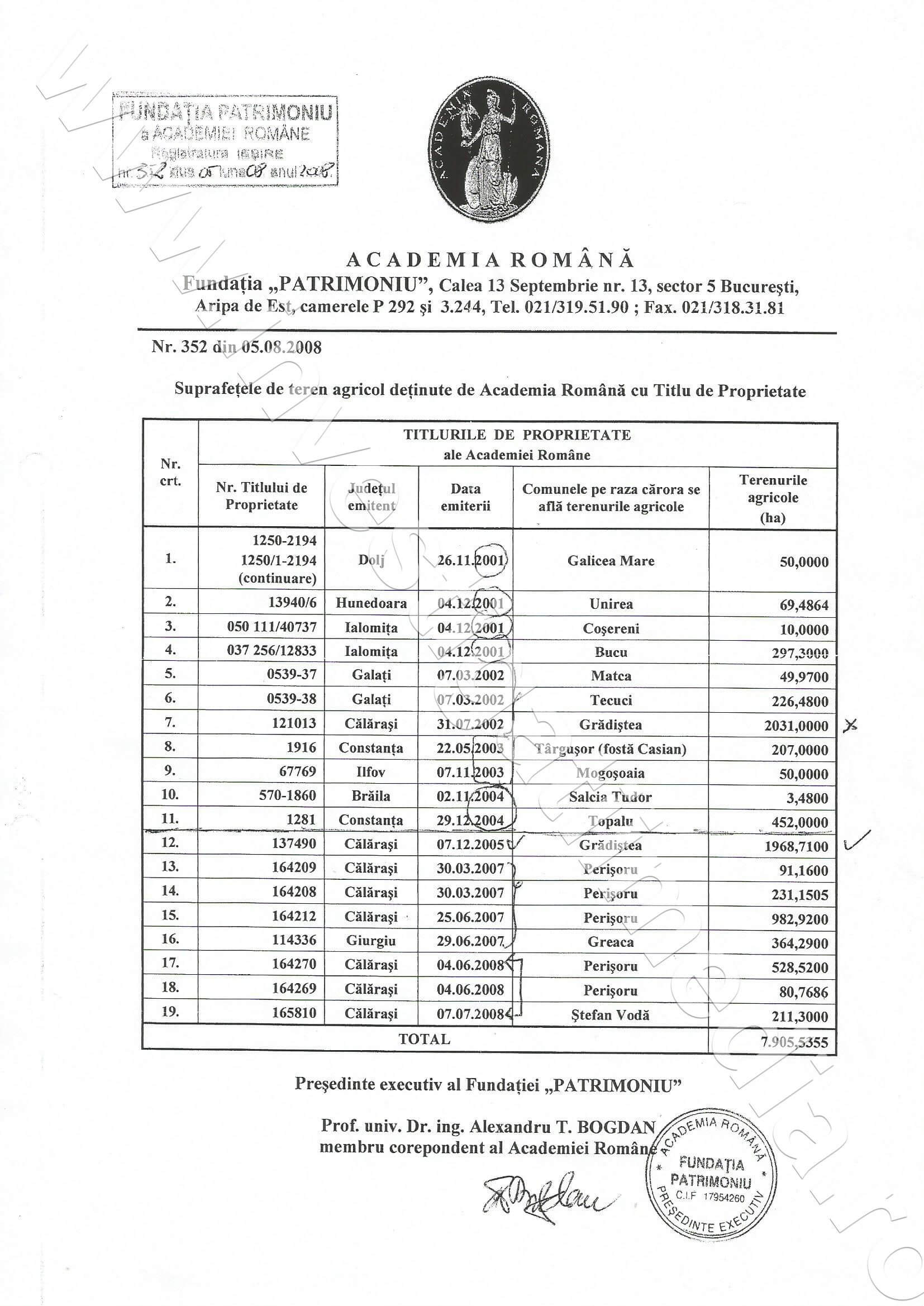 In 2007-2008, as is apparent in the above document, the Academy received its property deed with the signature of prefect Jenel Serban and, according to the agreement, leased it to Grivco SA.

Jenel Serban is currently the head of OJPDRP Calarasi. His CV, available on the website of the institution he runs, states he was a manager with Grivco SA in 2009-2010, where he was employed as a "specialist in agriculture".

Therefore, after returning land to the Romanian Academy for the benefit of Grivco SA, prefect Jenel Serban was employed in the Voiculescu family's group.

In the same capacity as head of the county land fund committee, Jenel Serban was indicted by the National Anticorruption Department for a series of irregularities in land restitution.

As head of OJPDRP, Jenel Serban, still a member of the Conservative Party, is the one who manages European projects through the National Rural Development Program. One of the beneficiaries of this funding is Grivco Agro, renamed AgroSeed Muntenia SRL in 2013, according to Trade Registry data obtained by the Media Investigation Center. 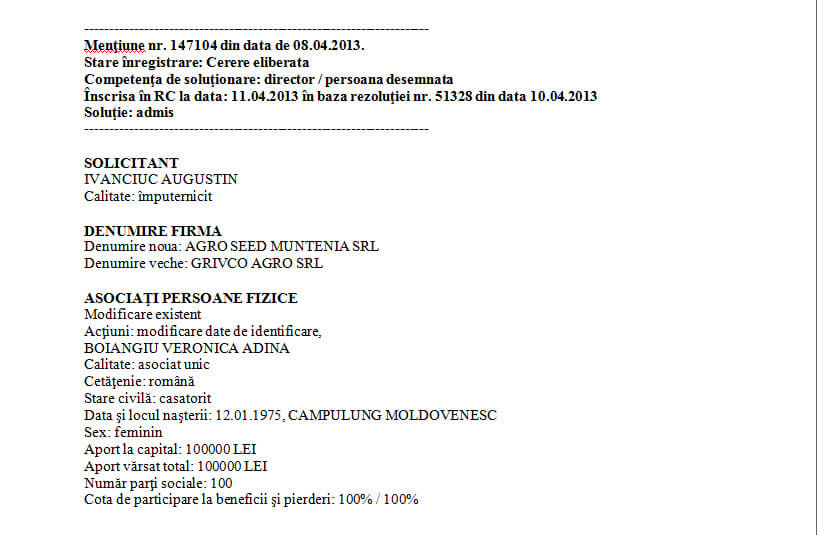 According to the local media, less than one month ago, Jenel Serban visited the successful project AgroSeed Muntenia SRL implemented in Perisoru, a project for the upgrade of irrigation networks on the land the company leased from the Romanian Academy, a project achieved through the institution he runs.

Contacted by the Media Investigation Center, AgroSeed Muntenia manager Ion Mihai said the company’s investments in the irrigation network on the nearly 2,000 hectares of land in Perisoru, leased from the Academy, amount to EUR1 million in EU funds and half a million lei.

“One million euros came from European funding and the rest, around half a million lei was the company’s own investment, all this just for the irrigation system. To say nothing of other investments. Like I said, we're not playing, we are farming and we're trying to be productive, we're among the top farming companies, we're turning a profit. This is my job in this company, to make a profit, this is what i was hired for and this is what I’m paid to do," said Ion Mihai.

He insisted he is a simple employee of AgroSeed Muntenia, although he did concede to the fact that he is the brother of Lazar Mihai, the CEO of Grivco SA and the person who represents the holding within the boards of most companies in the group.

There are further connections between Jenel Serban and Ion Mihai.

According to the statement of interests submitted by Jenel Serban in 2010, he was the majority shareholder of Art Media SRL. Ion Mihai stated, in 2008, that he was a shareholder in the same company, which is currently owned by Mihai and his wife.

The agreement concluded with the Romanian Academy for the lease of lands in Calarasi notes that Grivco SA has "experience in agricultural activities (…) as well as the required tools, farming equipment and financial resources" for this type of business. However, manager Ion Mihai said that, when time is short, Agro Seed Muntenia, which exploits the land leased from the Academy, sometimes concludes services contracts with various companies in the area to help with equipment and workforce in certain works such as sowing and harvesting.

"Yes, we do have such contracts. No one has all the equipment required for a certain agricultural campaign, it wouldn't be financially sustainable, so we do sometimes conclude this type of contracts," said Ion Mihai.

We asked Ion Mihai, over the phone, whether AgroCristi SRL in Calarasi was among these companies that provided services to AgroSeed during agricultural campaigns in Perisoru.

We insisted and asked the AgroSeed Muntenia manager to show us the contracts but he said he needed approval from the company administrator. Later on he said we could receive copies of the documents we requested but only following a written request sent by mail to the company's headquarters in Bucharest.

The Media Investigation Center will send the respective request by mail tomorrow and we will update this story when a reply is received.

The manager of AgroSeed Muntenia, Ion Mihai, is the brother of Grivco SA's CEO, Lazar Mihai, a key-person in most of oligarch Dan Voiculescu's businesses. 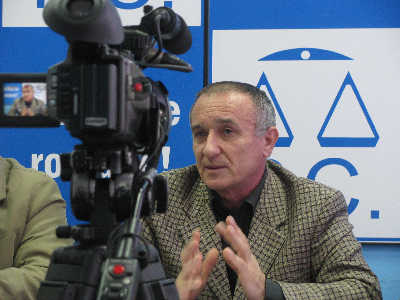 Ion Mihai said he worked for the Court of Accounts - Calarasi Chamber of Accounts between  1993 and 2007. In 2008, he became the manager of Grivco Agro, a company founded by his brother Lazar Mihai, according to the company records requested by the Media Investigation Center from the Trade Registry. 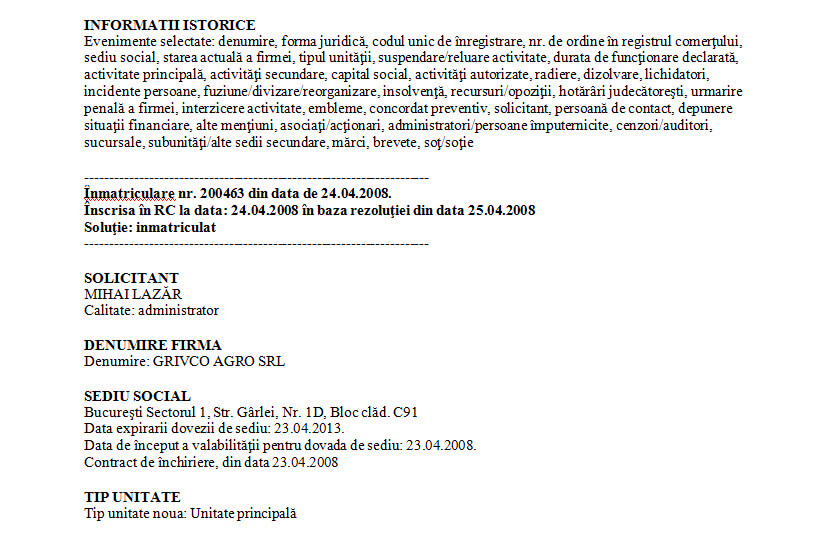 "I'm here to make a profit, I'm an employee. If i don't make a profit, I'm out. And this is bad year, we've had a rodent infestation that decimated the crops. That's my main concern right now, not the contracts you're talking about (with AgroCristi SRL, e.n.)," said Ion Mihai, adding all the company's affairs are perfectly legal.

He also said the price paid to the Romanian Academy for the lease of the land in Perisoru "is not at all low".

"The lease price is fair, we pay 800 kilos of wheat to the hectare, it's a fair price, especially since we pay with money, at a cost that includes transport, so the Romanian Academy is receiving a fair amount. We've invested money here, we're not playing, we're farming and we pay all our taxes in time, including the lease. We have nothing to reproach ourselves," added Ion Mihai.

We talked to Jenel Serban yesterday and he said all his company's contracts with AgroSeed Muntenia have expired.

"Each company works the land it has, whether it's leased or owned or whatever. The company in which I am a shareholder is not working Mr. Voiculescu's land, I don't know what kind of information you may have but we currently have no contract in this respect," Jenel Serban said yesterday.

We tried calling Mr. Serban again today for further questions but he could no longer be reached.

(This story is part of the project "Public Funds in Romania - corrupt tenders, mismanagement and theft ", carried out by the Media Investigation Center in partnership with Freedom House Romania and Expert Forum Romania within a grant of the U.S. Department of State, through the United States Embassy in Bucharest. The Media Investigation Center is solely responsible for the content of this story, which does not necessarily reflect the opinions of the U.S. Department of State or the United States Government. The partners and sponsors of this grant are in no way liable for this story.)