The connection between Grivco and the Romanian Academy's Patrimony Foundation

Yesterday, the Media Investigation Center brought you the story of the 452 hectares of land in Constanta that should have been returned to the Romanain Academy but were lost, with the apparent complicity of the executive president of the Academy's Patrimony Foundation. Professor Alexandru Bogdan. Also under the signature of Academy member Bogdan, part of the land in Constanta county, namely 117.4 hectares in the Topalu area, were leased for just EUR18,000 a year to a company that planned to develop a wind turbine park there. This company was half-owned by Grivco SA, a group of firms owned by the Voiculescu family.

Today we bring you documents that prove, beyond any doubt, the business connection between Professor Alexandru Bogdan, the former executive president of the Romanian Academy's Patrimony Foundation, and companies owned by Dan Voiculescu.

Through the note no. 5/22.03.2006, sent by the commercial company Centrul Pilot de Calificare si Consultanta Profesionala SRL to BRD, the company administrator gives power of attorney to Mrs. Ana Ichim for a series of banking operations on behalf of the company. 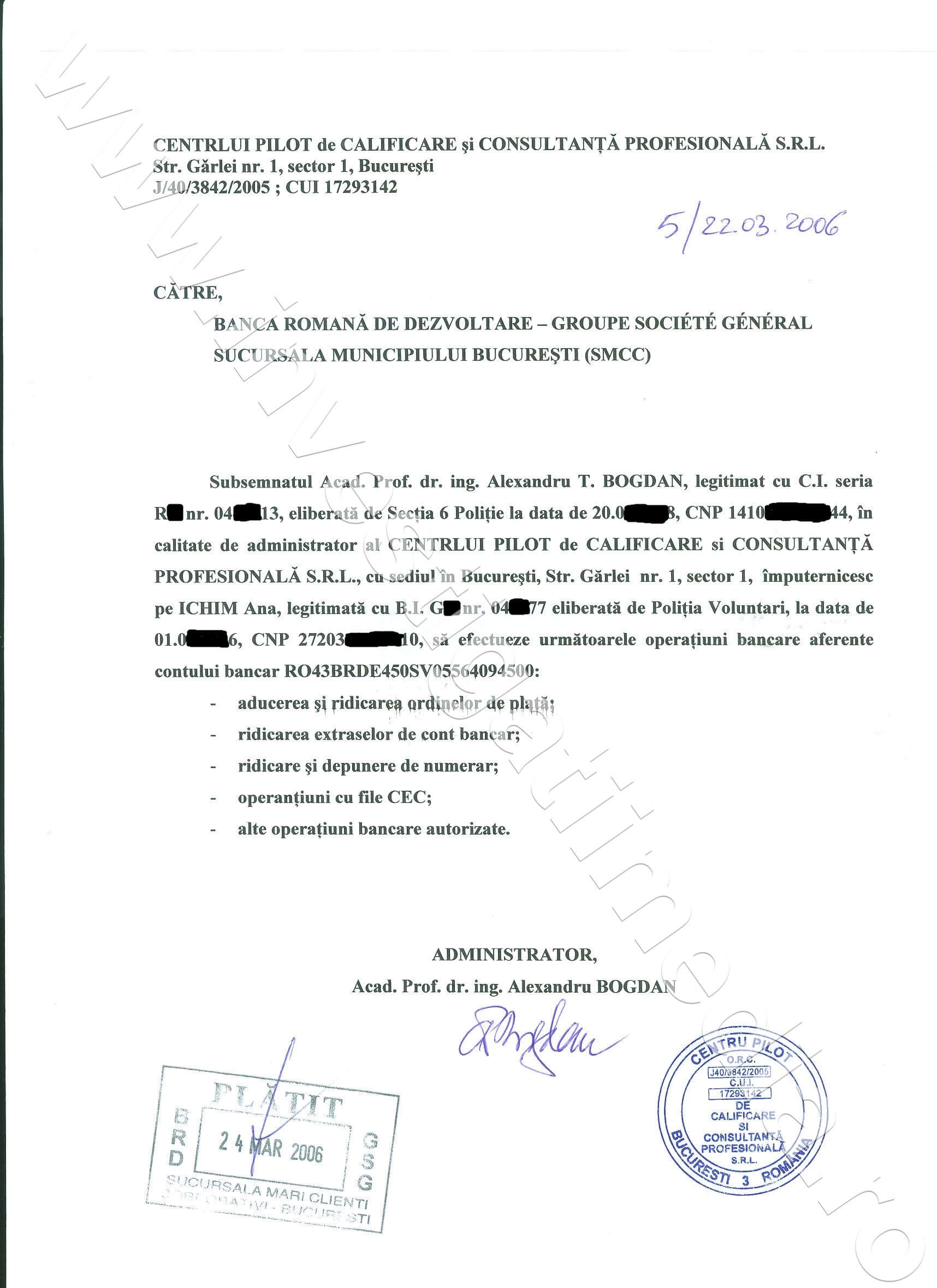 Based on the document above, a person named Ana Ichim withdrew money from the company's bank account several times. The Media Investigation Center obtained one of the leaflets that confirm one of the transactions made by Ana Ichim from the bank accounts administered by Prof. Alexandru Bogdan, dated March 27 2006. 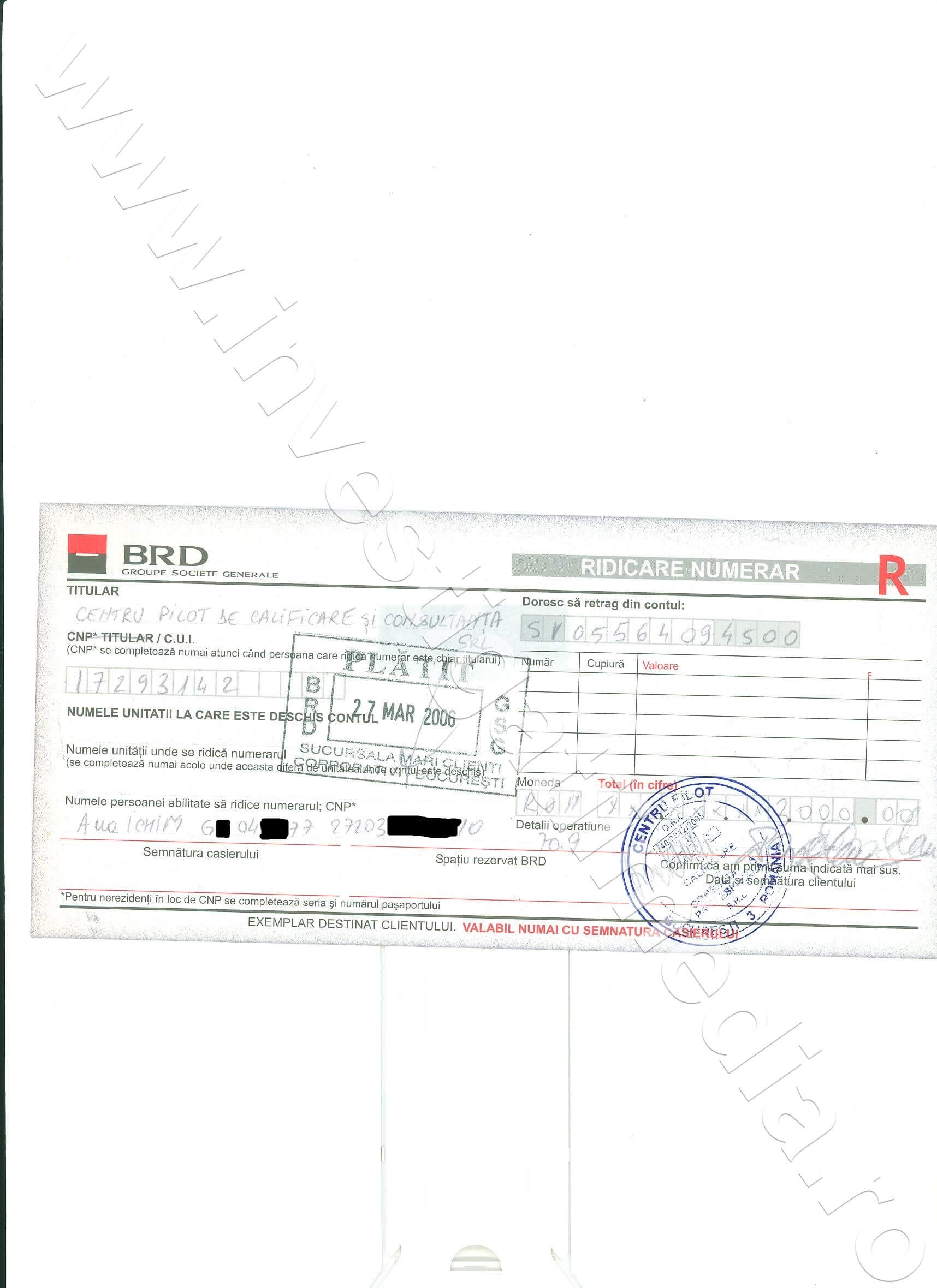 The company no longer exists at the Trade Registry under the name SC Centrul Pilot de Calificare si Consultanta Profesionala SRL, but has been turned into a software company called EastSoft IT SRL, with the same unique serial number (CUI) 17293142 and the same registration number J40/3842/2005.

Under "Power of attorney" in the form the Trade Registry utilizes to present company information, EastSoft IT SRL appoints ICS Administrare to serve as company administrator. ICS Administrare is headquartered in Bucharest sector 1, 22A Nicolae G. Caranfil street. Its representative is none other than the former minister of economy during the Tariceanu Cabinet, former presidential candidate on behalf of the Romanian Humanist Party founded by Dan Voiculescu: Ioan Codrut Seres. 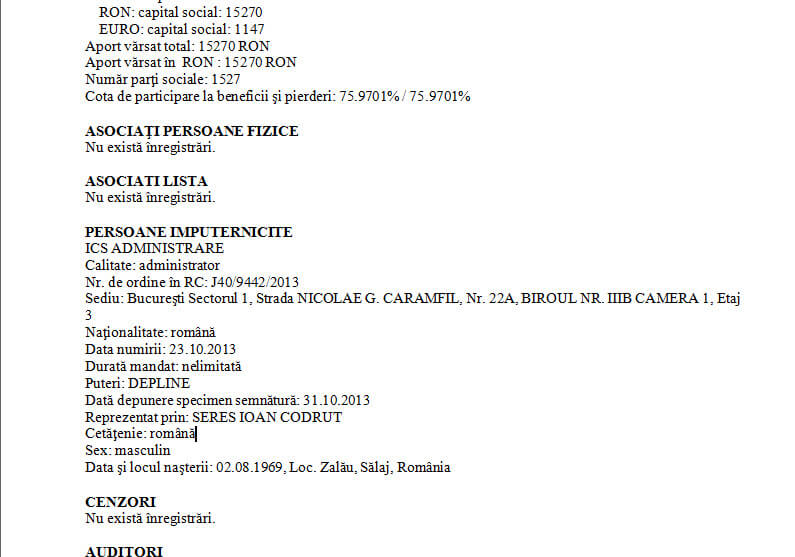 We phoned former minister Seres and he confirmed that he currently owns EastSoft IT SRL.

“Yes, it is a company that used to be part of the Grivco group and which I bought in 2011, when it was undergoing conservation and its activity had been frozen. I can confirm that, as the website reads, starting 2011 and up to the present the company was exclusively in the software business and no longer had anything to do with Grivco,” said Codrut Seres.

Asked about this company’s previous shareholders, Seres confirmed Grivco SA was among the company shareholders when he bought it in 2011.

“Yes, I can confirm, the company was part of Grivco, Grivco was one of its shareholders. I don't recall who the other shareholders were, I think Benefica (another company part of Grivco group, e.n.),” said Seres.

According to the statements of interests submitted by Dan Voiculescu over the years, the Patrimony Foundation, whose executive president was professor Alexandru Bogdan, signed two 20-year land leases in 2007 with Grivco SA. According to documents we are now publishing, in 2006 Alexandru Bogdan was the administrator of a company that, according to Seres, was owned by Grivco.

We attempted to phone Professor Bogdan for further questions regarding the documents we present in this story and to ask him about his activity as administrator for a firm owned by Grivco SA while at the same time he was the executive president of the Patrimony Foundation. We also wanted to ask Professor Bogdan who is Ana Ichim, the person mandated to take out money on his behalf from the account of Voiculescu's company.

However, he no longer answered our calls.

LATER EDIT: Professor Alexandru Bogdan did call us back later. He said he doesn’t remember any activity as administrator in any company part of Grivco.

“No, no, who knows, I tried, I had no activity, I never signed anything in this capacity,” he said.

We told Mr. Bogdan we were in possession of a document he had signed in that very capacity.

“No, certainly not, I need to see that (document, e.n.). You're asking me about 2006. It's 2014. I didn't receive any money, I didn't have a salary for this kind of thing, it was just as you can see, that we were allowed to have some kind of activity, we were trying to… a plan to train people, that's what's I’m good at, I'm a teacher, i train people," said Alexandru Bogdan.

When we insisted, Professor Bogdan continued: “I can't have been involved, I repeat, I don't recall any such activity”.

“I didn't sign for it to be held by Grivco, I definitely don't remember anything concerning this topic but I'll try to get more information, give me some time to see what this is all about,” said Bogdan when asked about Grivco being a shareholder in this company.

“I did not have any involvement in this matter," said Bogdan.

We also asked him about one Ana Ichim, whom he gave the power of attorney to get money from the account of the firm for which he served as administrator.

“Ana Ichim, Ana Ichim… There was a… Ana Ichim, in 2005-2006 or when did you say? I don't remember her so I can't tell you where she might be now … it's been years, but there was a lady who was an economist or… a chemist! There, I remember, she was a chemist!” said Bogdan, adding he did not remember where she worked.

He denied any family tie or any other personal connection with said Ana Ichim.

“Certainly not! No way,” said Bogdan.

However, he did not deny having granted Ana Ichim the power of attorney to withdraw money from the accounts of the firm he administered.

The Media Investigation Center will submit all these documents, as well as documents presented in the investigative story regarding the land in Constanta, to the Romanian Academy and judicial authorities.

(This story is part of the project "Public Funds in Romania - corrupt tenders, mismanagement and theft ", carried out by the Media Investigation Center in partnership with Freedom House Romania and Expert Forum Romania within a grant of the U.S. Department of State, through the United States Embassy in Bucharest. The Media Investigation Center is solely responsible for the content of this story, which does not necessarily reflect the opinions of the U.S. Department of State or the United States Government. The partners and sponsors of this grant are in no way liable for this story.)

0
Shares
The Grivco prefect in Calarasi County The Romanian Academy loses 452 hectares of land in Constanta county. Part of the land was leased to Grivco, a company controlled by oligarch Voiculescu, for a project that never materialized