Written by  Ovidiu Vanghele May 28, 2014
Published in Investigative reports

Six mentally-disabled people have died of unknown causes over one year and a half in an illegal centre in the small Romanian town of Breaza in Prahova county, 63.4 miles north of capital city Bucharest.

They had been left in the care of Bucharest’s fourth district authorities, who sent them to Breaza in 2012 and have since paid the centre roughly 250,000 euros in public funds, even though it was not legally authorized to function.

The company in charge of the “Casa Sfantul Toma” in Breaza was awarded a contract without a tender in 2012 by the General Department for Social Assistance and Child Protection (DGASPC) from Bucharest’s fourth district. The department, subordinated to the fourth district’s local council, has been paying at least 2,000 lei a month for each of the roughly 30 patients housed at the centre since October 2012.

Although all six have died at the centre according to the National Agency for Payments and Social Inspection (ANPIS), and two of them were listed as local residents, the Breaza town hall only issued a death certificate for one patient. The remaining certificates list Bucharest’s fourth district as the place of death.

The certificates should have been issued in Breaza in the presence of a doctor and the police, said ANPIS general manager Adrian Toader. Deputy Labour Minister Codrin Scutaru said authorities should have been notified. Instead, the owner of the company that runs the centre let a local funeral home deal with the dead, four of whom were aged 21-24.

"There are no serious issues, but there are issues that could become serious," Piedone said before leaving the house at 153 Ocinei Street in Breaza.

At the time, the centre still operated without proper authorization. More than 30 people are still housed there.

(Investigative piece in collaboration with the Center for Legal Resources.)

The agreement, released by DGASPC under the Romanian freedom of information act, states that “SC Casa de Odihna Sfantul Toma SRL is to provide services specific to its activity to young people institutionalized within DGASPC District 4, who are over the age of 18 and can no longer benefit from special protection, to prevent their social exclusion, as well as to District 4 residents who suffer from neuropsychological disorders whose families cannot provide basic care, and disabled adults in difficulty".

The fourth district’s DGASPC agreed to pay 2,000 lei a month for each beneficiary institutionalized in Breaza, a cost that could be adjusted under certain circumstances.

Even though the agreement’s thirteenth article, regarding reasons for termination, mentions "withdrawal or cancellation of functioning authorization" and "suspension or withdrawal of credentials", the company lacked the credentials to provide social services to begin with. This means the centre was functioning illegally, said ANPIS head Adrian Toader.

"It (SC Casa de odihna Sfantul Toma SRL) is not functioning legally, we checked following your notification (…) and found, besides several irregularities, that it was not operating legally and lacked the proper credentials," Toader told the Media Investigation Center in an interview.

At the time, the only way for a commercial company to be accredited as a social services provider was "only through their own foundations created for this specific purpose", according to the law that regulated social services in October 2012, ordinance 63/2003, article 11. Accreditation was also mandatory, and the company did not have it.

An annex to the agreement lists the services the centre was to provide, including accommodation, meals and care and medical services, which the company was not authorized to provide. 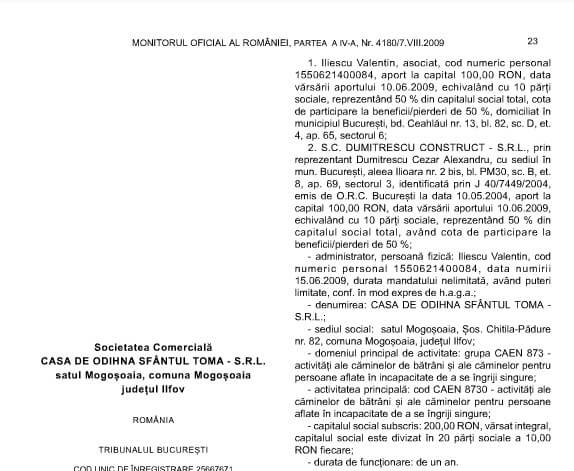 Dumitrescu and Iliescu had, at one point, a conflict that was settled in court and Iliescu left the company.

Casa de Odihna Sfantul Toma SRL knew they would get the DGASPC contract at least one week before. On Sept. 24, 2012, it hired another private firm, Endemedica SRL in Popesti-Leordeni, to provide psychiatric medical services to the Breaza patients for 400 a month, plus "additional services", which are paid separately, according to a note by ANPIS obtained under the freedom of access to information of public interest law. The tariff for Endemica SRL’s psychiatric services is mentioned in the first annex to contract no. 54/24.09.2012.

The second annex of the contract shows the two private firms agreed that two specialists from Endemedica will accompany "a group of 30 people to be picked up in Aldeni commune, Buzau county, and transported to the working point in Breaza, 153 Ocinei street", for a total price of 200 lei. This shows that everything was previously planned. 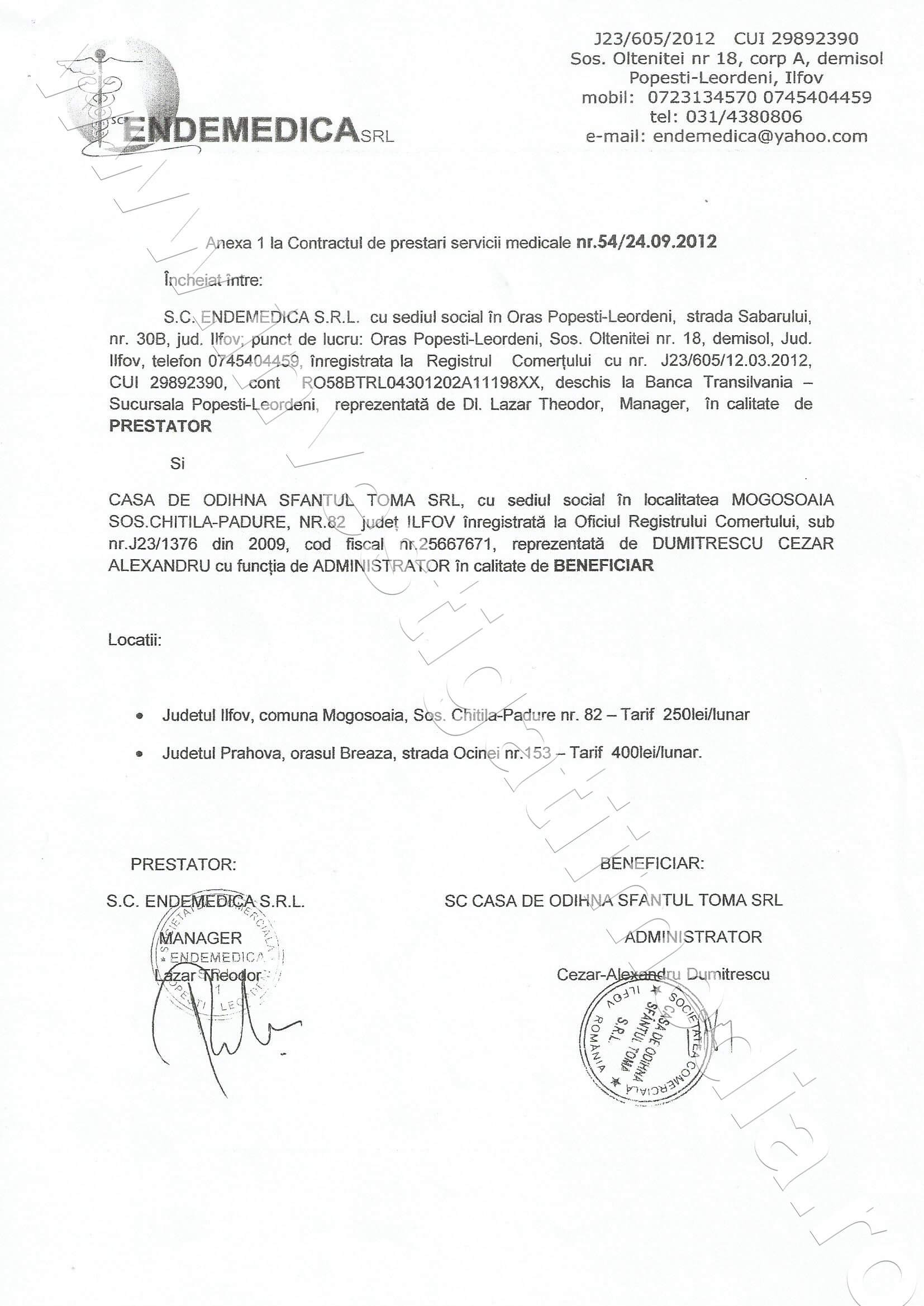 Although undated, the second annex could not have been drawn up later than the date of the contract, Sept. 24, 2012, which states that "during Sept. 24-28, 2012, the beneficiary shall make available to the provider a list of the people concerned, complete with their medical disorders and medication". 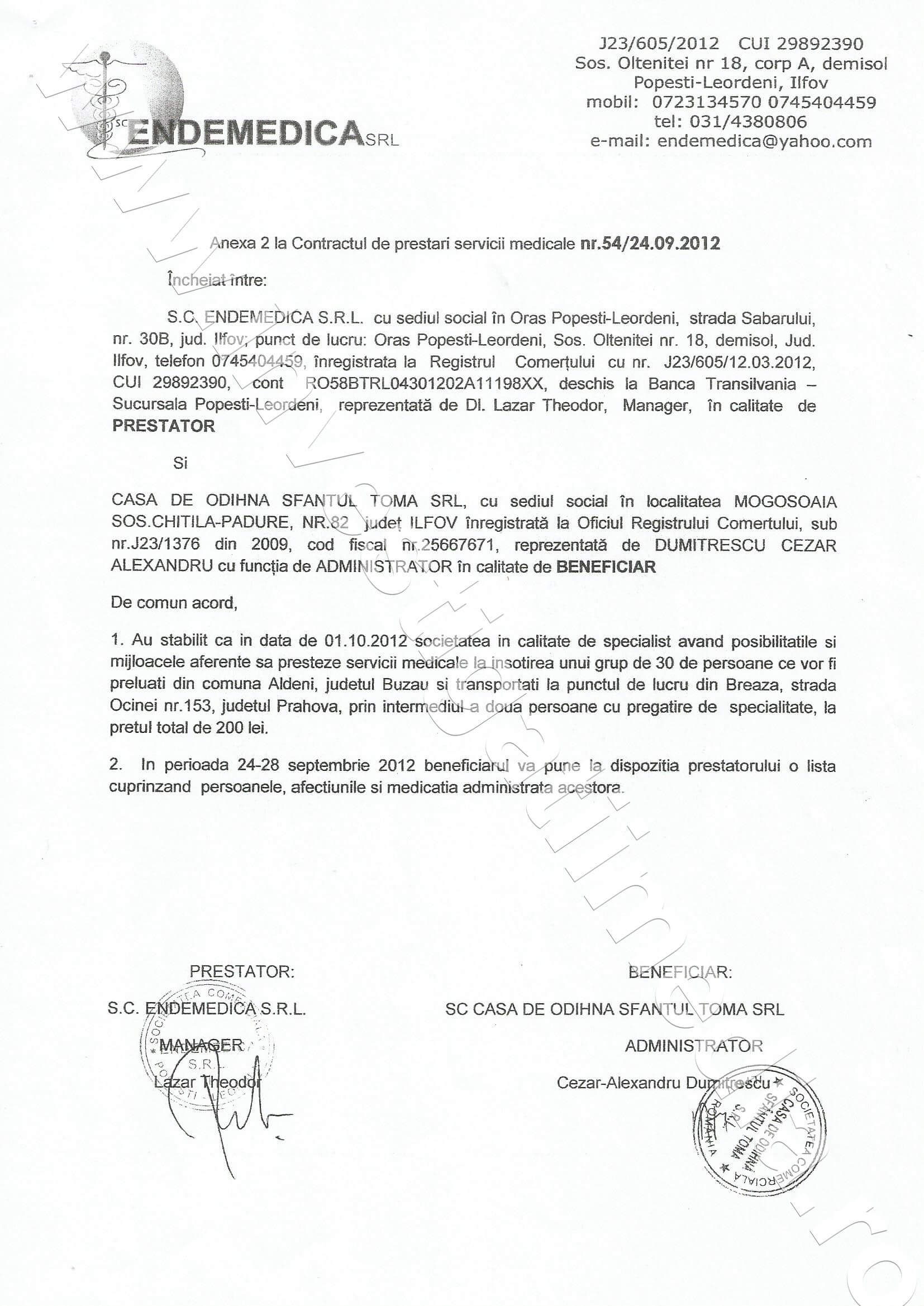 The documents presented above and other documents studied during the research phase of this investigation show SC Casa de Odihna Sfantul Toma SRL received RON 60,000 a month from DGASPC Distrcit 4 from Oct. 1, 2012 until May 2014. This translates into roughly 160,000 euros a year, and a total of around 250,000 euros to this day.

On Oct. 1, 2012, Bucharest fourth district’s DGASPC moved 30 mentally-disabled people to the centre in Breaza from another centre in the town of Aldeni in central Romania, notorious for horrific conditions brought to attention by the Center for Legal Resources (here and here).

Six of the beneficiaries, or a fifth of the people institutionalized moved to Breaza from Aldeni have died there between Oct. 1, 2012 and April 1, 2014, according to a list provided by DGASPC following a request under the Freedom of Information Act in Romania.

DGASPC did not reveal the patients’ names, citing the law regarding protection of personal information. It also declined to provide copies of death certificates issued for the six beneficiaries who died in the illegal center in Breaza, providing instead an edited document listing their medical conditions and causes leading to their deaths.

According to data and documents obtained unofficially, four of the six deceased were between 21 and 24 years of age: Corina Alina Ruhn (21), Nicusor Ionut Vasile (22), Nicoleta Ioana Croitoru (22) and Raluca Gabriela Nicolae (24). The other two were Sabin Raica and Adrian Oprisan Dragnea, 39 and 54, respectively.

Based on these data, the Media Investigation Center and the Center for Legal Resources notified the National Agency for Payments and Social Inspection (ANPIS), which conducted an investigation. ANPIS inspectors barely managed to obtain the death certificates of the six patients from the centre's administrators.

The administrators initially told ANPIS inspectors no one had ever died at the centre.

Breaza’s town hall issued a death certificate for just one of the deceased, while the other five certificates were issued by Bucharest fourth district authorities, according to a preliminary ANPIS note about their investigation obtained by the Media Investigation Center.

The five death certificates contain false information as in all five cases, the place of death is "Bucharest, District 4" instead of Breaza. The situation is even more serious since two of the deceased, Nicusor Ionut Vasile and Gabriela Raluca Nicolae, have had their official residency at the address of the center in Breaza since December 2012.

ANPIS general manager Adrian Toader says these ascertaining certificates "should have been issued at the place of death, namely SC Casa de Odihna Sfantul Toma SRL in Breaza, in the presence of a physician and police".

Cezar Dumitrescu, the owner of the company that runs the Breaza centre, told the Media Investigation Center during a long interview over the telephone recorded with his consent that all he did was outsource medical services to Endemedica and funeral services to a funeral home. He added he didn’t know what happened to the bodies of the patients who died in his centre but were registered as having died in Bucharest.

Asked why the centre for mentally-disabled people functioned without authorization, Dumitrescu said his company operated based on its object of activity, namely "NACE 8730: Residential care activities for the elderly and disabled".

Regarding the deaths, he was more interested in how we got hold of the information. He also complained that a reporter from the Media Investigation Center visited the centre by claiming to be a relative of a fictitious prospective patient. The visit happened early during research for this story. Previously, the Center for Legal Resources which is accredited by Romania’s labor ministry to make monitoring visits to such centres said it was denied access by gatekeepers.

The owner of Endemedica, Theodor Lazar, confirmed over the telephone that some of the ascertaining certificates had been signed by his wife, Dr. Nadia Lazar, a general physician for the Breaza patients. Lazar was unable to say how many such certificates his wife signed, but said authorities were not notified because "there were no suspicious deaths".

Lazar said he took offense to some of the questions the Media Investigation Center asked and he threatened to sue over the fact that journalists had obtained a copy of the contract his company signed with SC Casa de Odihna Sfantul Toma SRL.

The Media Investigation Center was unable to reach representatives of the funeral home hired by SC Casa de Odihna Sfantul Toma SRL to discuss the deaths in Breaza and clear up the reason why five of the death certificates contained false information regarding the place of death.

"We took them out of there, from the problem center (Aldeni, e.n.), we'll take them out of here as well unless you fix things,” the mayor told centre administrators during his visit. "There are no serious issues, but there are issues that could become serious."

Piedone told the Media Investigation Center that the fourth district’s DGASPC is not under his authority but that of the local council. He promised to discuss the matter after conducting his own investigation of the Breaza centre, through his subordinated institutions.

The same owners of SC Casa de Odihna Sfantul Toma SRL, who had also set up a foundation in 2012, obtained authorization to provide social services on behalf of the foundation on May 5, 2014, nearly two months since the first attempt to visit the centre and one month since the first official steps taken by the Center for Legal Resources and the Media Investigation Center to notify authorities. 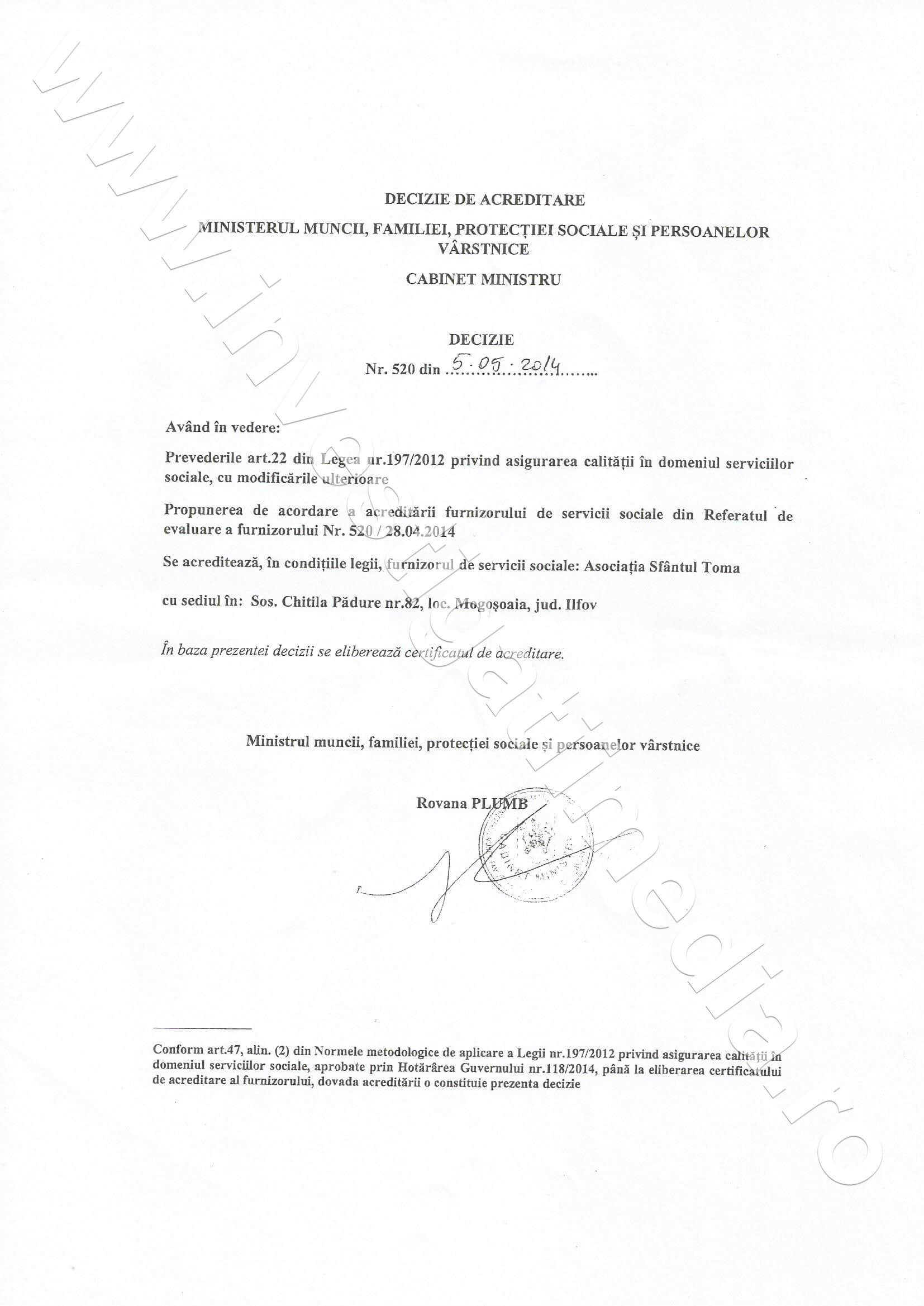 Asociatia Sfantul Toma, whose founding members are Cezar Dumitrescu, Alexandra Dumitrescu and Anca Coanda, was accredited to provide social services by decision no. 520 of May 5, 2014, issued by the office of Labor Minister Rovana Plumb. The accreditation application was submitted to the ministry on April 22, a reasonable term for a simple check-up of a few documents, said Carmen Manu, manager of the ministry's Department for Social Services and Social Inclusion.

Although the decision appears to be signed by Labor Minister Rovana Plumb, it was in fact  signed by deputy minister Codrin Scutaru. Contacted by the Media Investigation Center, Scutaru confirmed he had signed the decision, but explained the document is just a phase in the accreditation process, under the new law, and not the final step.

"The decision I signed doesn’t represent anything, it is just a decision of principle, it accredits the provider from the point of view of its documents. To be able to provide those services, the law requires the provider to obtain further authorizations and credentials, depending on specific services targeted," Scutaru said.

He added the Breaza case, if confirmed, is "very serious".

"If people really died there and judicial authorities were not informed of their deaths, then the matter is very serious and an investigation is required," said Scutaru, adding he would personally see to the situation.

The Media Investigation Center also contacted Labor Minister Rovana Plumb, who also promised a detailed investigation in this case and a check-up campaign targeting all social assistance centers in the country.

The Media Investigation Center and the Center for Legal resources will notify the proper judicial authorities of the findings of this investigation.

0
Shares
The Romanian Academy loses 452 hectares of land in Constanta county. Part of the land was leased to Grivco, a company controlled by oligarch Voiculescu, for a project that never materialized